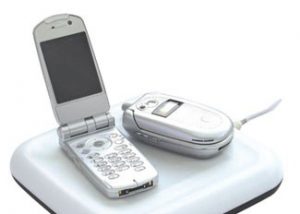 Humanity is dependent on electricity. Without it, millions of PCs will not turn on, trains will not go, planes will not fly. And where is electricity – there are wires … People constantly want to get rid of them, developing more and more advanced wireless communication systems. The emergence of Bluetooth, and then Wi-Fi, partially alleviated the problem of wireless communication and data transfer, however, one complication remained – wireless charging of mobile and computer devices. It is over the resolution of this issue that the best minds of a number of campaigns have been fighting since about 2002.

Who stands at the wheel?
The leader of the development was the British campaign SplashPower, in October 2002, announced the start of development of a wireless charging system for electronics. Initially, the SplashPower slogan sounded like “we will free consumers from the last wire in their apartment”, and the goal is to create such a recharging system so that it is extremely simple, safe and intuitive, so that every buyer without any special skills in working with electronics could understand that what

Developments were carried out under the cover of secrecy, and the data was classified as SplashPower had problems with licensing the technology. From the material that was told and shown to the press, it was possible to draw the following conclusions: SplashPower wireless technology requires two components. First of all, SplashPad is a universal platform, similar to a mouse pad that supplies energy. And the SplashModule is a tiny, less than a millimeter, energy receiver that mounts into a rechargeable device so that the SplashPad can “see” this device.

And then begin to happen interesting events. Apparently, due to the insufficient development of the technology, SplashPower begins to “feed” the press and the Internet with promises of a future revolution in the field of recharging, however, it does not bring its devices into the free market. It is reported that SplashPad will now have two types of delivery – multy, which will allow you to charge several mobile devices at once, and single, only for one device.

This situation persists until April 2007, when an article appears on the developer’s website about the start of cooperation with Synopsys corporation, which is engaged in development in the field of wireless systems. SplashPower chose their Synopsys Saber signaling simulation technology to create a virtual electromagnetic space and test the performance of Splashpower. Synopsys Vice President, Michael O’Brien (Mick O’Brien) in his interview states that he is very pleased with the cooperation with SplashPower, and I am glad that they together create a new generation of electronics for their customers.
In addition, SplashPower technology was used in the concept car, which was assembled by the automotive company Visteon. In the car, the SplashPad was located on the center console to allow the driver to forget about recharging a mobile phone. Together with the Bluetooth-headset, it gives a chance to forget about the wires and that the mobile phone can sit at the most inappropriate moment and directly focus on the process of driving.

SplashPower also signed contracts with Korean manufacturer Hanrim Postech and Hong Kong firm Celltronix. Both of these offices are major manufacturers of power supplies and chargers in their home countries, and have already agreed to use SplashPower technology in their future developments.
HOW DOES IT WORK?
So, let us dwell on the nuances of the process of transmission of electricity. SplashPower technology uses electromagnetic induction as a means of transmitting energy. This means that we no longer need any contact between the current source and the battery.
At the moment, electromagnetic induction is widely used in the widest range of areas, ranging from recharging electric vehicles and ending with recharging electric toothbrushes. A very important feature of the effect of electromagnetic induction is the generation of an electric field due to the magnetic field, and vice versa. Thus, it becomes possible to charge the batteries of electronic devices by placing them in the magnetic field of the “charger”.

Key technical features of the SplashPower system include:

lack of contact between the “base” and rechargeable device;
simultaneous power supply to multiple devices;
the level of energy supply is automatically adjusted depending on the type of charging device;
readiness for production;
safety in use;
extremely small dimensions.
Features SplashPad:
electromagnetic induction as a means of supplying energy;
uniform energy supply along the entire surface;
options for recharging both single and multiple devices;
easy integration into any subject, as already mentioned above, even a car;
any form of release and appearance;
Support for all existing European and US safety standards.
Features SplashModule:
getting energy from SplashPad;
versatile design – due to its size, you can easily embed it anywhere.