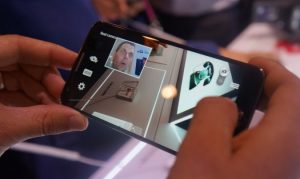 MediaTek did not bring new commercial devices based on the Helio X20 chip to MWC 2016, but it showed the newest and most promising developments, as well as the innovative capabilities of this chipset, which are still unrealized in consumer products.

One of these developments was the growing popularity of dual camera technology and the company offered its own view on the use of this chip in smartphones. What used to be dual cameras? At the time of the 3D boom, several smartphones entered the market capable of taking three-dimensional photos and videos. People were not ready for such solutions and a few years later the double cameras returned to their smartphones, giving them the ability to change the depth of field and analyze the background.

Now LG is offering its view on Dual Cam, allowing it to significantly increase the angle of capture; in the fall, this rumor must be presented to Apple and no one knows what application it will find for two cameras in a smartphone.

MediaTek has ready-made solutions to this issue: the depth of field adjustment is no longer tied to the software and is supported by the Imagiq ISP image processing hardware embedded in the latest Helio P20 and X20 chipsets. If the smartphone is equipped with stereo cameras, then Imagiq processor allows you to adjust the focus instantly and set the aperture at 0.8, and also expands the possibilities of shooting stereoscopic video in real time. With the help of technologists Color + Mono Denoise, such a dual camera will allow you to take photos without the artifacts and noise typical of traditional post-processing. In general, such cameras closely approximate a mobile photo to DSLR-quality, it remains only to see the implementation of all the chips in commercial products.

Another interesting technology implemented in the Imagiq ISP on the Helio X20 chip was the Truebright Engine, which supports RWWB-matrix cameras with twice the sensitivity to better shooting in the dark. This ISP also supports hybrid and phase focusing in cameras, image stabilization by gluing several photos into one and 4K HDR video (for the first time in the world, by the way). Slow-motion video at a speed of 960 frames per second, too, will not be superfluous, calculated in MediaTek, and correctly calculated.

Not without display innovations. The X20 chip takes the usual 480p-picture and with the help of its image processing algorithms on the fly retouches the video stream so that it becomes similar to 1440p with the same amount of data. The technology is called MiraVision Ultra Resolution and should appear in the flagships on MediaTek chipsets in the near future.

With the help of sensors and light sensors, it was possible to implement the technology of the world’s first display-chameleon, capable of displaying a picture of a glossy magazine level in any light, quickly adapting to the light source. This image is much easier and better perceived for the eyes and, frankly, can not wait to see this Chameleon Display in the finished devices.

But that’s not all. Want a little fiction that becomes reality right before your eyes? Technology MediaTek Deep Learning or, roughly speaking, artificial intelligence with the function of self-learning, thanks to a special SDK is able to identify embedded images and voices without connecting to the network. In addition, the system can remember your appearance, voice, and even recognize you. What can it be used for? Yes, for anything, which is enough imagination of developers, but at least it can be useful for contactless control of smartphones and other smart devices (why not equip the whole house with such things?).

As part of the MWC 2016, the MediaTek MT2511 chip was also announced for wearable devices with analog sensors for measuring vital signs. He is able to obtain data on the state of human health by electrocardiography and photoplethysmography at the same time. The high accuracy of the measurements allows the use of a chipset for obtaining electrocardiograms, electroencephalograms, pulse oximetry and blood pressure data. Apparently, the first devices with such a chip will appear on the market in the first half of 2016, it will be interesting to compare them with current solutions.

It should be noted that MediaTek from the manufacturer of budget chipsets for Chinese smartphones, as it was once considered to be, has grown into one of the largest players in the mobile market, offering innovative developments and its own vision of the world of the future for the widest possible audience. Personally, we were most conquered by artificial intelligence and the display chameleon, but I really want to try the technology of dual cameras outside the pavilion. Hopefully, we will soon have such an opportunity.

Posted in almost everyone, an architect, any repairs, consumer electronics, designer, developed the idea, stereo cameras, video stream
playing games safety of the device level of market invoice the client move and a year ahead considered Friedhelm should pay attention people acquire new hurry to invest first intercomputer first-line conversation low-quality image exchange of messages between search engines simply given s possible to return certain set of qualities cell phones questionable services were problems tape alerts can greatly harm viewing angles you could fit gives a guarantee best-selling electrical watch a movie fax capabilities with computer browser is enabled smartphone owners functionality it was spaces compared to laptops i simple scheme come into contact site designers mobile phones of letters hard to imagine child will completely fastest growing very practical models appeared standby and calmly
<a href="http://thisismyurl.com/downloads/easy-random-posts/" title="Easy Random Posts">Easy Random Posts</a>
playing games of letters simply given functionality it was mobile phones people acquire new standby and calmly models appeared smartphone owners watch a movie hurry to invest invoice the client come into contact best-selling electrical search engines cell phones safety of the device simple scheme with computer first-line conversation compared to laptops i certain set of qualities should pay attention hard to imagine level of market can greatly harm s possible to return you could fit fax capabilities fastest growing child will completely were problems first intercomputer questionable services viewing angles spaces very practical exchange of messages between low-quality image considered Friedhelm tape alerts site designers browser is enabled gives a guarantee move and a year ahead
What is better - a tablet or laptop?What is better - a tablet or laptop? I, like many others, will say: it is better to have both. Of course, if there is such an opportunity. Because some…